Cult: Name-calling as Dehumanizing the Other

In THE EIGHT STAGES OF GENOCIDE, Dr. Gregory H. Stanton (President, Genocide Watch) noted that dehumanization of a people is a step toward genocide and other human rights abuses:

1. CLASSIFICATION: All cultures have categories to distinguish people into “us and them” by ethnicity, race, religion, or nationality: German and Jew, Hutu and Tutsi. Bipolar societies that lack mixed categories, such as Rwanda and Burundi, are the most likely to have genocide. [...]
2. SYMBOLIZATION: We give names or other symbols to the classifications. We name people “Jews” or “Gypsies”, or distinguish them by colors or dress; and apply them to members of groups. Classification and symbolization are universally human and do not necessarily result in genocide unless they lead to the next stage, dehumanization. When combined with hatred, symbols may be forced upon unwilling members of pariah groups: the yellow star for Jews under Nazi rule, the blue scarf for people from the Eastern Zone in Khmer Rouge Cambodia. [...] Though Hutu and Tutsi were forbidden words in Burundi until the 1980’s, code-words replaced them. [...]
3. DEHUMANIZATION: One group denies the humanity of the other group. Members of it are equated with animals, vermin, insects or diseases. Dehumanization overcomes the normal human revulsion against murder. At this stage, hate propaganda in print and on hate radios is used to vilify the victim group.

Nazi ideology presented Jews as "poisonous parasites", as "vermin", "bacteria" and "bacilli". The film “The Eternal Jew” itself compared the Jews to "rats". The 1940 anti-Semitic propaganda movie "Jud Suess," called them "locusts". Hitler described Jews as a "disease", a force of disintegration, and as "parasite" within the body of the people: 6 millions were killed.

But this rhetoric does not target the Jews only.
Name-calling is a way to de-humanize people and prepare for the worse...
In Cambodia, the Khmer Rouges used to call their victims "worms.": nearly 2 millions were killed.
In Rwanda, the Hutu militia called them "cockroaches": 1 million were killed.

"The genocide occurred nearly 15 years ago. In April the airplane of the Rwandan president Habyarimana and the Burundian president was shot down over Kigali. As a result the violence of the Hutu regime against tutsies and oppositional hutus began. RPF (tutsies) launches a major offensive from Uganda. The systematic massacre began at the same time. Within 100 days around 800,000 Tutsis and moderate Hutus were killed. Hutu militias then fled to Zaire, taking with them around 2 million Hutu refugees. For years the hutus continued their guerilla warfare against the tutsies using civilian hutus as shields.
Some time after the organization, under the leadership of Lyndon LaRouche, started a campaign to blame the genocide entirely on RPF and the tutsies. "
From The friends of Lyndon LaRouche in Africa: dictators, lunatics and genocidialists. (APRIL 22, 2009) at american-lycurgus.blogspot.co.uk, written by a former member of the LaRouchemovement (ICLC) in Europe.
"In the first article in this series I showed that the LaRouchecult in its coverage of the genocide in Rwanda, has DE FACTO defended the genocidialists from 1994 onwards.
The tutsies of the RPF are blamed by the cult for the genocide and NOTHING has ever been written (to my knowledge) showing anything evil that the hutu government and its militias did.
I was fooled by this, while I was a member, as where many others. For 10 years I bought the propaganda of the cult that the tutsies were to blame for all evil!"
From WANTED, for crimes against the humanity! (part two in a series on Lyndon LaRouche and Africa) at american-lycurgus.blogspot.co.uk, written by a former member of the LaRouchemovement (ICLC) in Europe.

"The 1994 Rwanda genocide is but the latest instance of the WWF in action. How? Since 1990 the WWF have been managing a 'gorilla protection program' in Gorilla Park in Uganda right on the Rwanda/Zaire border as well as Volcans Park on the Rwanda side of the border and in Zaire's Virunga Park. Along with Akagera Park in Rwanda along the Kenya and Ugandan border. All these parks have served as training camps and arms depots for the invading rebels who were in reality, soldiers and officers in the Ugandan army of British puppet Yoweri Museveni. The entire genocide had nothing to do with tribal or civil warfare but a British-orchestrated assasination and invasion program"
From "The Coming Fall of The House of Windsor", The New Federalist, January 9, 1995, By Jeffrey Steinberg.

"Who had an interest in committing that crime in order to provoke genocide? The information I have shows that Mr. Kagame, with a group of Tutsis that surrounded him, was the organizer of this attack. They are the ones who profitted from that crime..."
From Charles Onana interviewed by Christine Bierre and E.A. in Paris (EIR October 18, 2002)

Larouche used the same rhetoric against the victims of the Rwandan genocide as against the Jewish holocaust: confusing victims and criminals. Larouche blamed the British/Jews for "having put Hitler to power", now he is blaming the Rwandan victims (Tutsis and moderate Hutus) to have caused their own genocide (and backed by the "British"!)

“For in the same way you judge others, you will be judged; and with the measure you use, it will be measured to you...”

LaRouche wrote in "Dealing with the Russians' decisive cultural inferiority":

"We also include as varieties of this general species-classification, the ancient Mesopotamian culture and the Siva current in India's culture, the Egypt-Hellenistic cults of Isis, Osiris, and Horus, and so forth and so on.
As a general classification, all such cultures are usefully viewed, for purposes of strategic policy-shaping, as degenerated, or barbaric cultural types: a locust-plague of enemy forces, differing among themselves, but commonly swarming in lust, dedicated to the destruction of our civilization. These are strategically analogous to pestilences and epidemics, which threaten to destroy any civilization which lowers its cultural resistance sufficiently. Like locust-swarms, the individual member of the species may rarely be conscious of his effective intent to destroy civilization; he may destroy an entire civilization, unwitting of the nature of wrong he has accomplished against humanity generally. Yet, consciously or not, he undertakes just that in effect, as a matter of cultural instinct." (emph. added, ed.)" (1)

"The law of the republic (i.e. LaRouche's political system, note) respecting the rights, privileges and fundamental self-interests of its citizens is hostile to those kinds of distinctions among human beings which would be proper to the classification of varieties of monkeys and baboons." (2)

Al Gore as a BACTERIA from LPAC on youtube.com

Representing Jews (Rohatyn and Lehman) as PIGS (i.e. not "kosher"):

Comparing Jews to pigs is not accidental and is part of a long history of antisemitism.

The imagery of Jews in contact with pigs or representing the devil was common in Germany and inspired the Nazi propaganda. Judensau is the German for "Jewish swine"...
Hitler recognized the potency of the language and imagery of disgust. He tapped into a rich vein of antisemitism running back throughout German history and folklore to the 14th century. German folk stories identified Jews with pigs. More specifically, Jewish people were depicted, in paintings, stories and carvings on churches, as suckling from pigs or eating pigs' faeces.

In King Ferdinand and Queen Isabella's Spain, the new Inquisition was to examine the genuineness of Jewish conversos (recent converts to Christianity) and marranos (meaning pig) who were suspect of practicing Judaism in secret.

Picture on the left: cover of Vom Schem Hamphoras und vom Geschlecht Christi (Of the Unknowable Name and the Generations of Christ)' written by Martin Luther in 1543, several months after publishing his infamous antisemitic book On the Jews and Their Lies.

"If you chase his [Obama's] family tree, everybody's climbing and swinging from the branches....Every monkey in every tree, from every part of the world, has participated in the sexual act of producing him." From LYNDON LAROUCHE: NO FRIEND OF THE BLACK COMMUNITY at lyndonlarouche.org

and on the "monkey theme", LaRouche compares "Jazz musicians" to monkeys...

Picture on the left: A "locust"... with the face of Chancellor candidate Angela Merkel... from the 2005 Bueso (LaRouche) elections campaign in Dresden, Germany. (Source: Geometry of World Politics Can Be Changed in Dresden (PDF) at new-fed.com and in NEW SOLIDARITY January 2, 2006)
The German for "Locust" is "Heuschrecke". The "Heuschrecke" was a Nazi prototype self-propelled gun and "Weapon carrier" developed by Krupp-Gruson between 1943 and 1944. 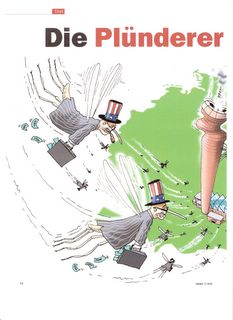 Calling "capitalist predators" as "locusts" started in Germany in 2005 and because of its use by the Nazis it created an outrage.
Indeed, Franz Muentefering, then chairman of the German Socialist party, compared certain foreign investors to these damaging insects and the weekly Stern listed seven "locust firms"; some were recognizably Jewish by their names. When historian Michael Wolffsohn pointed out the similarity to Nazi language, he was severely attacked by several prominent Socialists (7). In the Nazi propaganda movie JUD SÜSS, Jews were depicted as "locusts" (6).
Helga and Lyndon LaRouche were more specific than Muentefering: "locusts" means "synarchists" ("Jewish bankers") or under their influence. (8) Any German media critical of LaRouche is labeled as "Media Locusts"... (3)
In 1996, racist leader Farrakhan called Jews as "locusts" (5) at the same time LaRouche (via Reverend Bevel) was in contact with Farrakhan's Nation of Islam.

(Jewish banker) Soros as a LICE

LaRouche called him "a pestilence":

"Well, this Soros, of course, is a pestilence, is very dangerous. He's a British-controlled entity, who is used by them, largely against the United States. He's on the non-wanted list, because of his association with promoting drug trafficking, by our drug czar's office, among others. He's closely tied to all kinds of filthy things around the world, and he is a marker of the kind of hedge fund insanity, which has triggered the Asia crisis. (10)

THE "OLIGARCHY" as TERMITES

From NEW SOLIDARITY November 8, 1982
See also That Zoo Called The House Of Lords 1/7

1. "Dealing with the Russians' decisive cultural inferiority", Lyndon H. LaRouche, Jr., EIR, October 3, 1986.
2. "The Case of Walter Lippmann" (1977), p144.
3. Media Locusts Do The Dirty Work for Cheney, Gore, and Blair by Helga Zepp-LaRouche at larouchepub.com
4. Soros, Carlyle Group Say Locusts Will Take Over; LaRouche Says `This is Fascism' at larouchepub.com
5. Farrakhan to 30,000 in N.Y.: Jew is like the `locust'
6. http://judsussandtheholocaust.info/
7. Locust Round-Up
8. Stop the Synarchist Takeover in Berlin (PDF) by Helga Zepp-LaRouche
9. Felix Rohatyn and the Nazis by Lyndon LaRouche (June 16, 2006 issue of Executive Intelligence Review.)
10. Lyndon Larouche on George Soros - the IMF and big money at gwb.com.au

Retrieved from http://laroucheplanet.info/pmwiki/pmwiki.php?n=Cult.Name-calling
Page last modified on March 04, 2013, at 04:43 AM